SurveyCTO datasets help you to organize and manage your data. Broadly speaking, you can use datasets to:

You can combine the first two functions for situations where you want to treat the data submitted as part of one or more survey forms as pre-loaded data for one or more other survey forms. As you can imagine, there are a great many possibilities.

Datasets are similar to spreadsheets. They are organized around rows (also known as "records"), on the one hand, and columns (also known as "fields") on the other. SurveyCTO datasets (also known as "server datasets") are constructed and maintained on the server. They can be used to pre-load data into survey forms, and form submission data can publish into these datasets (however: in the case of encrypted forms, only fields explicitly flagged as publishable – and thus left un-encrypted – can be published into a server dataset). Server datasets can also be monitored for data quality or published to the cloud so that incoming data streams out to, e.g., some kind of outside visualization or dashboard.

All datasets are similar in that they are collections of rows and columns, can be attached to forms, and can be published into by forms. Enumerator and cases datasets are only different in that they each have a specific structure in terms of their columns, have some special settings, and integrate into the broader platform in particular ways. So, for example, the enumerator field type loads enumerator lists from enumerator datasets, and the Manage Cases interface loads case lists from cases datasets. See Managing enumerators and Case management for details.

Manual use of server datasets

The Your forms and datasets section of the Design tab has all of the options you need to manually manage server datasets for the purposes of attaching pre-loaded data to your survey forms. See Pre-loading data into a form for a full discussion. You can upload new or revised data; download, rename, or purge existing data; and manage to which forms each dataset will be attached as pre-loaded data.

When you purge a server dataset's existing data, all rows of data will be deleted – but the existing columns in that dataset will remain (albeit currently empty). If you want to completely eliminate old columns that are no longer desired, you will need to delete the dataset entirely, then re-create it.

And when you upload data for a dataset, you always upload a .csv or an .xlsx file. Please note the following: 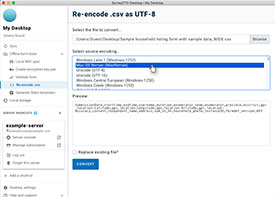 Aside from attaching server datasets to survey forms, you can also download or export these datasets for your own back-office or analytical purposes. To download a dataset's current data, click on Download and then Download data on your server console's Design tab; that will give you a .csv file with all of the dataset's current data. To export a dataset's current data, simply select that dataset from the list of forms and datasets when exporting data with SurveyCTO Desktop. Exporting dataset data follows the same process as exporting form data. Please note that if you are automatically publishing form submissions into your dataset, then your download or export may not reflect data published within the last few minutes. Dataset .csv files are only updated once 5-10 minutes have passed since the last update to the dataset; this prevents datasets – and the forms to which they are attached – from updating with every single form submission.

And finally, you can click Attach to manage the list of forms to which any of your server datasets are attached. An attached dataset's data will be available as pre-loaded data that can be pulled into calculated form fields, used to dynamically populate multiple-choice option lists, or even pre-loaded as default values for user-editable survey fields.

That covers the basics of using manually-managed datasets for attaching pre-loaded data to survey forms. See the following topics in this section for discussions of more advanced dataset techniques.